This interesting episode in the long history of Roman-Parthian conflict found a Roman republican allied with the Parthians against Roman imperialists. 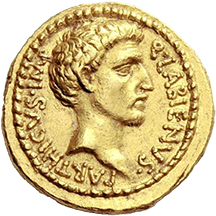 The father of Quintus Atius Labienus was Titus Labienus, who had been Julius Caesar's most important general in the Gaul campaign. However, at the beginning of the civil war, Quintus' father broke with Caesar and joined forces with Pompey. Titus Labienus later died at the battle of Munda fighting Caesar's forces.

Quintus Labienus fought to restore the republic under Gaius Cassius Longinus. Cassius, who was among Caesar's assassins, had campaigned successfully against Pacorus I, and declared himself proconsul of Syria during the civil war that followed Caesar's death. However, it cannot be doubted that the Parthians were later actively supporting republican Romans instead of fighting them, for a Parthian contingent had come into  Cassius' possession after he defeated Caecilius Bassus. Upon learning that Antony and Octavian were crossing the Adriatic to end Cassius' threat to Egypt, Cassius sent these Parthians to accompany a group of ambassadors to request additional Parthian support. Among the ambassadors was Quintus Labienus who apparently succeeded in his mission, for Parthians were counted among the defeated republican forces of Cassius and Brutus at the battle of Philippi (in Macedonia) against Octavian and Antony, 42 B.C.

Following his victory at Philippi, Antony went to Tarsus to consolidate his control in the east. From Tarsus, where Antony rendezvoused with Cleopatra in late summer of 41 B.C., Antony moved into Syria. There he appointed L. Decidius Saxa governor, and a Roman force was sent against Palmyra. The Palmyreans fled to Parthian territory where they influenced the Parthians to attack the Romans yet again. Joining the Palmyreans were the pro-Parthian petty rulers who had gained power following Crassus' defeat in 53 B.C. when Roman control was weak, and who now fled before Antony's advance to the protection of Parthia.

But when Antony moved southward to Alexandria, the Parthians again invaded Syria in the spring of 40 B.C., this time allied with Quintus Labienus. Labienus, knowing of the proscriptions following the battle at Philippi, had joined with the Parthians to fight imperial Roman forces. Under the joint command of Pacorus and Labienus, the Parthian army crossed the Euphrates and attacked Apamea. Though the assault failed, Roman garrisons around Syria rallied to Labienus, with whom they had fought under Brutus and Cassius. The combined army then defeated Saxa in a pitched battle where the Parthian cavalry's skill and larger numbers caused many troops of Saxa's quaestor (his brother) to desert to Labienus. Saxa, making a forced retreat at night to Antioch, lost most of his men also. Labienus and the Parthians then took Apamea without resistance. After defeating the Romans at Apamea, Pacorus turned south with a portion of the army and conquered the Levant from the Phoenician coast through Palestine. Labienus turned north to follow Saxa, then caught and killed him in Cilicia after taking Antioch. Labienus then proceeded to take all of Asia Minor, and the Parthian army added the legionary standards of Saxa to those of Crassus already housed in Parthian temples. With Labienus, the Parthians had in two years restored their territory to nearly the limits of the old Achaemenid empire and controlled all of Asia Minor except for a few cities.

In Judaea, Antigonus, a son of Aristobulus II, deposed his uncle John Hyrcanus II with Parthian assistance and proclaimed himself the newest (and last) Maccabean ruler. His victory was not complete, for Herod (also a son of Antipater) escaped to Rome where Antony and Octavian named him king of the Jews.

But the successes of Labienus and the Parthians were not long-lasting. Disagreement between Labienus and Pacorus weakened their combined effect. In 39 B.C., a Roman counterattack killed Labienus and recovered Asia Minor. One year later Pacorus was killed in Syria when he attacked a Roman camp that he had been led to believe was undefended. Herod personally led another Roman army to retake Jerusalem, capturing the holy city from the Parthian-supported Antigonus after a five-month siege.

While allied with the Parthians, Labienus minted both silver and gold coins, but in only one type; they were probably used as a donative to Saxa's legions. Controversy exists on both the meaning of the obverse inscription and the riderless horse on the reverse. Was Labienus calling himself Imperator of the Parthians? Possibly the reverse design is an allusion to the missing, assassinated Julius Caesar, or maybe a tribute to the Parthian cavalry. Vagi [vol. I, p. 71] notes the engraving style of the aureus and denarius points to Antioch as the mint and late 40 B.C. as the date, and that some Antioch tetradrachms and bronzes can be ascribed to Labienus.

The silver denarius is rare and, as of 1997, Sayles1 reported only four examples of the gold aureus were known. Harlan Berk2 published the fourth specimen in 2008, and an auction3 in 2010 documented a fifth specimen. Hersh records 34 specimens of the denarius, struck from eight obverse and twenty reverse dies4. Below, 55 denarii are illustrated.

Coins in the Name of Quintus Labienus

The coins of Labienus are rare; only five examples of the aureus are known; all are illustrated here. Images of the gold and silver coins on this page are serially numbered for identification in Notes. Click on coin images to enlarge:

If you have the sale catalog or know the location of photos for any of the following denarii mentioned by Hersh, please contact Chris Hopkins:

Bahrfeldt, M. von. Die Römische Goldmünzenprägung während der Republik und unter Augustus (1923), (who knew of only 3 examples, one each in the British Museum and Paris, and a third which was offered to the Berlin Museum in 1902), Bahrfeldt 69