This chart presents the genealogy on which all dating and attributions of this web site are based, and represents the generally accepted genealogy for Parthian rulers and rival claimants. (See commentary below.)

In main, the chronologies of Frye [The History of Ancient Iran (1984), pp. 209ff, 360] and Sellwood [An Introduction to the Coinage of Parthia, 1980, 2nd ed.] are followed with some modification. Specific changes include revisions to the early kings following Koshelenko's theory of descent based on information found in the Parthian ostraca of Nisa. [Koshelenko (1976), "Genealogia Pervykh Arshakidov", p. 34]. Koshelenko reconciles Justin (Trogus) with Arrian, based on archaeological evidence. Olson's study of Greek letterforms (1973) and additional numismatic evidence have been considered. The revised father-son relationship between Mithradates IV and Vologases IV is established by the inscription on the bronze Herakles [W. I. al-Salihi, Sumer 43 (1984), p. 219, and J. Black, ibid., p. 230]. Tiridates III was added at the end of the genealogy following Sellwood's clarification of a numismatic inscription in "The End of the Parthian Dynasty" (1990). 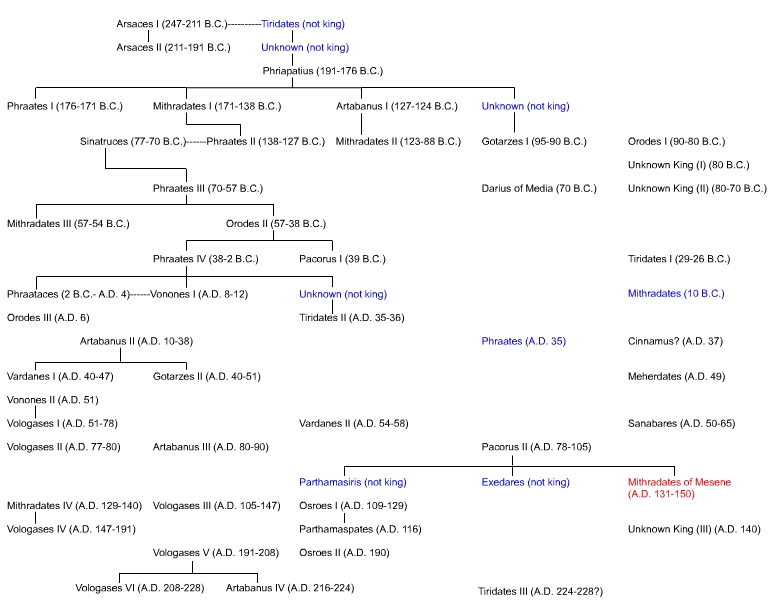 Commentary: The chart above represents the generally accepted genealogy for Parthian rulers and rival claimants. It is well accepted that the genealogy of Parthia is a hypothetical construction against which new information is tested. Where new information is consistent with the genealogy, it is included; if it is not consistent, then the genealogy needs to be changed after consensus is achieved. It is important to note that the publication of a proposed change to the Parthian genealogy or a new attribution in a journal (or in a sales catalog or on an Internet web site) does not make it accepted – it only presents it for consideration. The hesitancy to accept changes is especially strong for articles in popular journals, or where the author fails to fully justify the proposed changes or offers a "trust me, I've seen the evidence but you cannot" approach or,  even worse, refuses to answer criticism. Acceptance is achieved after publication of new theories in books or juried journals which meet these requirements:
(1) the evidence has been published or made available for inspection by any serious scholar, and
(2) the new conclusions are found consistent with the evidence, and
(3) the review and critique process has been completed by recognized scholars.

There are very few incontrovertible facts about Parthian history. It is for this reason that the generally accepted genealogy (and thus also a numismatic attribution system) in the chart above is used on Parthia.com. This in no way diminishes the valuable work that has been accomplished by scholars in Parthian studies during recent years, but confirms that their work will not be considered generally accepted until it has been tested and accepted as the consensus among respected scholars.