The coins of Tiridates III were attributed to Artabanus IV by Sellwood1 due to an uncertain Parthian Aramaic inscription. In an article titled "The End of the Parthian Dynasty," Sellwood corrected his earlier reading based after the appearance of a coin which confirmed the inscription.2 It is now clear that the correct reading of the reverse inscription is tr'dt or trdt (= Tiridates). 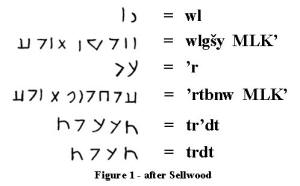 However, the name of Artabanus IV still appears on all of the coins of Tiridates III. An Arsacid with this name was elected king of Armenia circa A.D. 216, but we cannot be certain it is the same Tiridates who issued these coins. The Armenian king appears to have died before the final battle with the Sasanians. Sellwood concludes that, in any event, Tiridates was the last Arsacid ruler of Parthia.

In addition to the possibility that Tiridates III was the last Parthian ruler (and his mints added his name to existing dies of Artabanus' under the press of Sasanian conquest), it is also likely that the coins were an emergency issue, for the second line of Aramaic letters on reverse of Type 89.4 drachms are squeezed into a too small space just above the archer.

As for dating the reign of Tiridates III, we can tentatively assume that it is after the demise of Artabanus IV (c. A.D. 216 - 224), since Tiridates added his name to the coins of his overlord without naming himself as king. It is likely that he continued the struggle against Ardashir I for a short while before vanishing. Perhaps he was defeated and killed, or escaped to Armenia. There are a number of kings and commanders from Armenia called Tiridates after the Sasanian overthrow of the Parthians. The fact that Tiridates does not style himself king also suggests that he might not have been an Arsacid prince. Perhaps he was a high-ranking army commander serving the Arsacids, not the chosen successor of Artabanus IV.

Undoubtedly, after the defeat and death of Artabanus IV the Parthian mint personnel had to rapidly switch allegiance to a new master. An army on the retreat from Sasanian forces would have had to make do with temporary mints and local craftsmen untrained in cutting dies for minting coins. The main purpose in such a difficult period would have been to strike coins to pay the soldiers with little concern for the accuracy of portrait or details. Any coin resembling that of the dead Parthian king would have been sufficient, but it is significant that Tiridates added his name on the drachms. No tetradrachms are known for either Artabanus IV or Tiridates III, but Vologases VI (c. A.D. 208 - 226) continued issuing tetradrachms until 539 SE (A.D. 228).

Coins of Artabanus IV with the name Tiridates

The attributions and cataloging of Parthian coins used throughout this web site follow David Sellwood's An Introduction to the Coinage of Parthia (1980, 2nd edition) for consistency. The few exceptions to this policy are explained here.